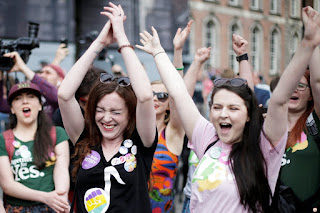 Irish pagans rejoice in the freedom to kill unborn children.

In October 2014 I preached about a decision by the US Supreme Court which was a preview of the Obergefell decision that came in June 2015, and in part this is what I said:

"It has been many decades, some would say centuries, since the Gospel of Jesus Christ was the primary engine for the formation of culture in the West, and now we are seeing the rapid abandonment of the Gospel as a source of law in the West. For fifty years and more the trajectory of law and culture in Europe and the United States has been away from the Christian worldview and towards a new paganism, particularly in regard to sex, marriage, reproduction and family life: no fault divorce, birth control, abortion, in vitro fertilization, surrogate motherhood, embryonic stem cell manipulation, assisted suicide, multiple remarriages, and now same sex marriage. These changes in law and custom are but a reflection of the post-Christian character of our civilization, and for most people today, Christianity is neither a life-changing nor life-giving force; it is simply a relic of a pre-modern past. And that is among the many reasons we are now witnessing the all but complete collapse of cultural Christianity.

"I welcome this collapse of cultural Christianity because I believe that only when Christianity as a cultural memory is gone can Christianity as an evangelical movement return. As for Christians in the first centuries after the Resurrection of Jesus Christ, so now it is our privilege in a post-Christian culture to change human lives one at a time and then to form vibrant sub-cultures which can eventually shape entire cultures with the liberating truth of the Word of God. That is the framework of the New Evangelization and of Evangelical Catholicism, and I welcome the arrival of same sex marriage in the United States as a harbinger of the time when the boundaries between the Church and the world can be clarified, especially for us, by the disappearance of the last vestiges of cultural Christianity. In other words, Christians must let go of nostalgia for our faded Christian civilization in order to build it again."

This morning I went back to that homily from 2014 because no one should have been surprised by the results of the Irish referendum on abortion, and while Christians may be disappointed by the enormity of the resurgence of paganism in Ireland, the fact of this choice should help us all see more clearly that every last vestige of cultural Catholicism is now gone. And I say good riddance. Now we can get to work again bringing one person at a time to friendship with the Lord Jesus, and to assist in that effort we should assume that everyone we meet is a pagan - whether they are baptized or not, whether they are ordained or not - until it is revealed by their lives that they are disciples of Christ and have accepted the Gospel in the obedience of faith. But there is a corollary to this principle which too many Catholics are still reluctant to accept, and I mentioned this too in my 2014 homily:

"If we can see the collapse of cultural Christianity as a great evangelical opportunity, then with joy and love we can proclaim Jesus Christ crucified and risen to the millions of people who now have only debonair nihilism to help them understand the purpose and meaning of their lives. To put it plainly: if we let the new pagans be honest pagans, then we have a new opportunity to propose to them that Jesus of Nazareth is the Son of the living God, the Way, the Truth and the Life. It’s when we ask others to live as Christians without being Christians that we set the stage for bitter conflict with those who do not share our faith, and in fidelity to her divine Lord, the Church never seeks to impose herself or her teaching on any person or society. We seek only the liberty to teach what Christ teaches, to organize our lives around that teaching, and to invite all others to accept him as Lord and Savior."

I mourn for the lives that will be destroyed in Ireland because of the referendum legalizing abortion, but this tragedy lays bare an even graver problem. A land which received the Gospel of Jesus Christ 1,500 years ago has now reverted to paganism, and that pattern has been repeated over and over again throughout the West for several generations. And what I said to this point in my homily from 2014 can be said of the acceptance of abortion in Ireland:

"My friends, by our Baptism we are called to invite others through our words and deeds to follow the more excellent way of divine love revealed by Jesus Christ on the Cross, but we cannot do that if we think or speak of those who do not share our faith with derision or contempt or hatred. So even as the news in the coming months is filled with smiling, newly married same sex couples on the steps of the court house, do not allow your hearts to harden. Remember, instead, that the final collapse of cultural Christianity clears the way for a new proclamation of the Gospel which is the power of God unto salvation for all who believe, and our proclamation of that Gospel begins now and always with our own continuing and ever deeper conversion to the Lord Jesus Christ." 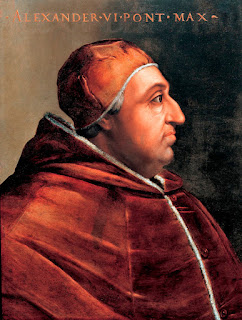 For most of the 19th and 20th centuries, the Bishops of Rome were saintly scholars and heroic pastors who inspired great devotion among Catholics because of their radiant goodness, and for the Church to have the service of such men is a great blessing. But in that blessing lies a danger. When we have so many valiant shepherds on the Chair of St Peter, one after the other, we can forget that many scoundrels and notorious sinners - to say nothing of average men of modest ability - have also served as popes, and that forgetfulness opens us to undue distress when a pope comes who doesn't measure up to his predecessors. Pope Alexander VI - Rodrigo Borgia, pictured above - reminds us that the office of the papacy can certainly survive and in some ways even flourish when occupied by a man who is manifestly unfit to be the Pastor of the Universal Church, and that knowledge should console anyone who is troubled by the character or actions of a man who sits on the Chair of St Peter but
Read more