Showing posts from July, 2012
Show all

The Dictatorship of Relativism

7/28/2012
On 19 April 2005, the College of Cardinals elected Joseph Ratzinger to follow Blessed Pope John Paul II on the Chair of St. Peter, and on that day he became Pope Benedict XVI. The day before his election to the papacy, Joseph Ratzinger, in his capacity as Dean of the College of Cardinals, celebrated a Mass “Pro Eligendo Romano Pontifice” (For Electing the Roman Pontiff) which was the last public event before the beginning of the Conclave in the Sistine Chapel. During that Mass in St. Peter’s Basilica with the Cardinals concelebrating, Ratzinger preached about the importance of them all understanding the situation of the Church in our time, and he pointed to the principal danger confronting Christianity in the early 21st Century: “Today, having a clear faith based on the Creed of the Church is often labeled as fundamentalism. Whereas relativism, that is, letting oneself be ‘tossed here and there, carried about by every wind of doctrine’, seems the only attitude that can cope w
Read more

Our Lady of Medjugorje?

7/21/2012
Medjugorje is a village located (since the crack-up of Yugoslavia) in Bosnia and Herzegovina but populated almost totally by Croats. Since June 1981, a small group of villagers have claimed that the Blessed Virgin Mary regularly appears to them with messages from heaven, and despite the constant warnings of the local bishop that there is no basis to believe these claims, Medjugorje has become the third most visited pilgrimage site in Europe. Many Catholics of undoubted orthodoxy have been to Medjugorje and reported that they saw there only abundant signs of grace at work in the thousands of pilgrims who come there to pray. And yet ... and yet there are very serious counter-signs also at work in Medjugorje.  The most serious of these counter-signs is the man who was once the spiritual director of the self-proclaimed visionaries and a champion of the alleged apparitions. His name is Tomislav Vlašić , and he was once a Franciscan priest. He is now a disgraced ex-Catholic and laicized fo
Read more

"The Eagle has landed." 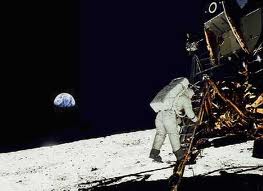 From Bill Bennet at The American Patriot's Daily Almanac : On July 20, 1969, Apollo 11 astronauts Neil Armstrong and Buzz Aldrin floated high above the lifeless surface of the moon in a boxy, four-legged landing vehicle named the Eagle. The radio hissed, and a voice called across space from Mission Control in Houston, a quarter of a million miles away: "You are go for powered descent." An engine fired, and the fragile craft began its downward journey. It would not go exactly as planned. Alarm signals flashed inside the tiny cabin, warning that Eagle's computer was overloaded. As the spacecraft hurtled toward the surface, engineers in Houston had seconds to decide whether to abort the mission. "Eagle, you are go for a landing," they directed. The astronauts continued their descent, but when Armstrong looked out the window to study the moon's surface, he realized that they were not where they should be. The computer was supposed to guide t
Read more

Called to Communion is a splendid website run by converts to the Catholic Faith from the various parts of Reformed Christianity -- meaning Calvinists of one stripe or another. If you know Presbyterians with questions about Catholicism, please suggest that they visit www.calledtocommunion.com . The essays and commentary are always thoughtful, articulate, charitable, and directed to an exploration of serious theological matters without rancor.
Read more
More posts