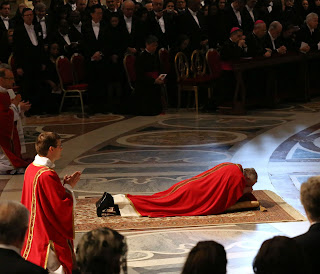 One final thought. In his new book Evangelical Catholicism, George Weigel argues that the Church is presently living through a transition from its Counter Reformation arrangement to something new: its Evangelical Catholic configuration. I believe that Weigel is correct, and one consequence of that transition will be the letting go of whatever in the Church is derived from Imperium rather than from Evangelium. This process has been underway in fits and starts for more than a century, and it will continue -- and, I suspect, accelerate -- in new ways during the pontificate of Pope Francis. Those who are discomfited by this transition would do well to consider the arguments made by Weigel in his book and to bear in mind the essential differences between matters of style and matters of substance. Jorge Bergoglio manifestly believes that the Gospel of Jesus Christ is the power of God unto salvation for all who believe, and he will fulfill his new duties as Bishop of Rome and Pastor of the Universal Church according to the truth of the Gospel. If he chooses, however, not to maintain some of the accoutrements of a Renaissance prince, then let no one read into that more than Pope Francis intends: Ecclesia Semper Reformanda et Purificanda.
Posted by Fr Jay Scott Newman at 08:32