Showing posts from August, 2012
Show all

Obama at the Smith Dinner? Yes. 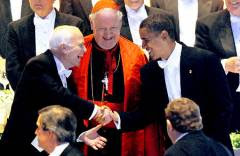 Alfred Emanuel Smith (1873 - 1944) was the 42nd Governor of New York, and in 1928 he became the first Catholic to run for President of the United States. In 1945, one year after Smith's death, Francis Cardinal Spellman, the Archbishop of New York, inaugurated the Alfred E. Smith Dinner to honor the public service of Smith and Catholics in political life and to raise funds for Catholic Charities. For 67 years, the Smith Dinner has been one of the fixtures of New York's social, political and philanthropic life, and the famed Dinner is an intersection of leading figures in politics, culture, and the Church. Because Smith was the first Catholic to run for President, the dinner has also traditionally included the presidential candidates when it is held in an election year. In 2008, for example, John McCain and Barack Obama (pictured above) were invited by Edward Cardinal Egan, and both accepted. Following this well-established precedent, Timothy Cardinal Dolan has invited Mitt R
Read more
More posts