Showing posts from January, 2011
Show all 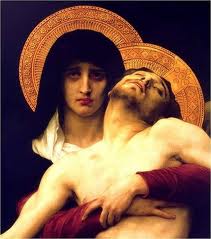 Our Lady of Sorrows, pray for us. Yad Vashem is Israel’s official memorial to the martyrs of the Nazi Holocaust, or as it is called by the Jews, the Shoah. The Hebrew words Yad Vashem, taken from the Prophet Isaiah, mean “a place and a name.” At Yad Vashem the millions of Jews who were exterminated like vermin have both a place of final rest and a name to be remembered. During the Great Jubilee of the Year 2000, Pope John Paul the Great made a pilgrimage to Yad Vashem, and there in the powerfully stark Hall of Remembrance he spoke of the horror inflicted upon the Jews by a dehumanizing ideology of hatred. In part, the pope said: “In this place of memories, the mind and heart and soul feel an extreme need for silence. Silence in which to remember … Silence because there are no words strong enough to deplore the terrible tragedy of the Shoah … I have come to Yad Vashem to pay homage to the millions of Jewish people who, stripped of everything, especially of human dignity, were murdered
Read more 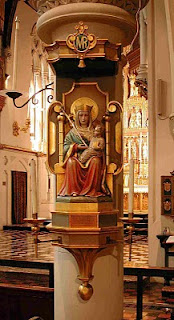 Today in Rome and in England , something momentous occurred. In accordance with the Apostolic Constitution Anglicanorum Coetibus , the Holy See created a new canonical structure in England and Wales for Anglicans who want to be Catholics. It is called a Personal Ordinariate , and it is essentially a non-territorial diocese which allows Anglicans who become Catholics to preserve their Anglican parochial, liturgical, and devotional identity in the Catholic Church. The Ordinariate is named for the Mother of God as she is venerated at the ancient English shrine of Walsingham, and it has been placed under the heavenly patronage of Blessed John Henry Newman, the Anglican priest who became a Catholic and then a priest and a Cardinal of the Catholic Church in the mid 19th century. This is a bold move on the part of Pope Benedict XVI. In a single stroke, Benedict has broken the logjam of official ecumenical conversations which began with such promise in the 1960's but which had lately be
Read more
More posts